US, Afghanistan squabble over resurgent Taliban

09/22/05 "SMH" -- -- A rift is opening between Washington and Kabul on how to tackle a resurgent Taliban which, mounting evidence suggests, now operates a modern-day "underground railroad" tapping into the terrorist expertise of the Iraqi insurgency.

President Hamid Karzai's demands for the US to back off militarily are becoming more strident, even as his own officials warn that the Taliban has more fighters, has access to better explosives and detonators and is better equipped and funded.

A security analyst operating in Afghanistan told the Herald: "What they're doing is apeing the US.

"The Americans embedded with the Afghanistan National Army to impart experience and to boost morale, and the foreign jihadis are embedding with the insurgents, instructing them on how to deal with the US from their experience in Iraq, how to conceal themselves and how to make, plant and detonate even more sophisticated IEDs (improvised explosive devices)."

It is a development that has been the stuff of background briefings. But this week's edition of Newsweek magazine carries interviews with two Taliban commanders enthusiastically revealing details of their training in Iraq and how, in turn, they pass it on to hundreds of Afghan fighters.

He says: "I'm explaining to my fighters every day the lessons I learned and my experience in Iraq. I want to copy in Afghanistan the tactics and spirit of the glorious Iraqi resistance."

Another commander, Hamza Sangari, 36, tells how he went to Iraq in a group of 15 - eight Afghan Taliban, two Central Asians and five Arab al-Qaeda fighters. Aided by drug-smugglers, they went through Pakistan and into Iran, going by foot, motor-cycle and four-wheel-drive.

Claiming that he spent four weeks at a remote Iraqi training camp called Ashaq al Hoor, he tells how he was drilled in the use of remote-controlled detonators and how to make armour-penetrating weapons by breaking up rockets and rock-propelled grenade rounds and repackaging their explosive content with powerful, high-velocity "shaped" charges.

Mohammed Daoud reveals in the interview that in the past eight weeks his men used as many as 18 IEDs based on his Iraqi training, claiming they had inflicted 20 casualties on their US and Afghan targets.

In background briefings, senior US military officers fret over the Taliban recruiting fighters in dozens of refugee camps just over the Pakistani border, the use of the camps as covert training centres and the failure by Kabul and Islamabad to check the ease with which fighters and bombing teams cross the border.

But, increasingly, the camps are also used as transit points - for Afghans going to Iraq for training and for jihadis from Iraq and other conflicts coming to Afghanistan.

A senior US military officer told the Herald: "There's still a significant Afghan refugee population in Pakistan. This is a generation of Afghans who have grown up in the camps who are ripe for the picking by the Taliban and criminal gangs."

The security analyst interviewed by the Herald stressed that a new development was that the movement between the two countries had become two-way - novices to Iraq to be trained and experienced fighters to Afghanistan and the border camps to impart their knowledge locally.

He said: "The trainers who come here don't go to the frontline. They sit back with radios, guiding the Taliban men in the field and doing static training in the camps. They come in from the Middle East, the gulf countries and other parts of Central Asia."

He explained that proof of the effectiveness of the technology exchange was in the nature of Taliban attacks. "In 2002-03 they were using old Russian stuff - wires and plungers - and they had to be close in.

"Now it's faceless. Their detonators are so sophisticated, they can sit back two kilometres and explode an IED remotely through a simple wire antenna hanging from a bush next to a device that might have been planted days or weeks earlier. Boom! Off it goes and before you know it, he is back over the mountain where he picks up a spade in a field and looks just like any other village farmer."

In the same way that the Americans hailed last year's relatively peaceful presidential election, Mr Karzai yesterday declared Sunday's parliamentary elections in Afghanistan to be a defeat for terrorism.

But the polls, almost 12 months apart, bookend the most violent period since the US-led invasion of Afghanistan in late 2001. So far this year, more than 1000 Afghan civilians and terrorism suspects have been killed, along with almost 70 Americans.

In that time the Taliban has revealed itself as a leaner, more tightly organised guerilla force, intent on adopting the homicidal ferocity of the Baghdad insurgency as a tactical template.

And apart from their use of more sophisticated IEDs, they also have proven access to what are believed to be Russian and Chinese-made surface-to-air missiles (SAMs). They have downed several US aircraft and launched brazen, but failed, strikes on others taking off from American bases.

US officials here believe the SAMs originate in Iraqi Kurdistan and follow the same route as the jihadi trainers and trainees - through Iran to Afghanistan, where they are sold for about $US2500 each.

But using the Taliban's failure to mount a major attack during the weekend election, Mr Karzai is demanding that the American war against terrorism, which is driven by its pursuit of Osama bin Laden, needs to focus less on military action in Afghanistan.

Claiming there was no serious terrorist threat from Afghanistan, he told reporters that the US needed to focus on where terrorists were trained, their bases, their suppliers and sources of funding.

He did not name Pakistan, which Washington treats as a valued ally in its war on terror. But the Afghan President's officials do that for him in briefings with foreign reporters.

Mr Karzai also questioned the US reliance on powerful air-strikes on suspected Taliban and other anti-Kabul camps and hideouts, in which the Americans are frequently accused of killing peaceful Afghan civilians. And he reiterated an early demand that US-led forces must seek permission from the Afghan authorities before searching Afghan homes.

But for all his bluster, Mr Karzai's efforts to neutralise the Taliban have made little headway. Only a handful of key Taliban figures have responded to a generous amnesty under which they are allowed to resume life as ordinary Afghans - six of them were candidates in Sunday's poll.

The Americans measure success against the Taliban in bodies. They claim to have killed at least 450 out of a total insurgent force of several thousand in the past four months.

And the US response to Mr Karzai's latest demands was to duck addressing them directly.

But there was no hint of compliance when Lieutenant-General Karl Eikenberry warned that Afghanistan and its allies, including 190 Australian troops who arrived in the country this month, still faced a big task.

But he seemed to be speaking to Mr Karzai, when he told reporters: "The need for commitment and patience is absolutely essential."

The general accepted that military means alone would not end the terror, but he warned there would be more fighting in the coming weeks, and that 30,000-plus US-led foreign troops in Afghanistan would be on the offensive through the autumn and into the Afghan winter.


BERLIN - The outgoing German cabinet Wednesday extended the mandate of German troops operating in Afghanistan by one year, but stuck by its policy of not becoming involved in curbing illegal drug production and trade, Defence Minister Peter Struck said.


Struck said he had a mandate to increase the number of German troops operating with the International Security Assistance Force (ISAF) from the current 2,250 to 3,000.


Nevertheless, he had no intention of doing so at present, he said after the German cabinet met for the first time since Sunday's elections.

"It's not clear when we will be able to end the engagement in Afghanistan," Struck said.

demands from the Left Party, which secured close to 10 per cent in the elections, more than doubling its support, for Germany to withdraw its troops.

"I regard it as totally irresponsible for German troops to be removed from Afghanistan. This would open the gates to terrorism," Struck said, adding that such a move would isolate Germany internationally.

Struck underlined that German armed forces would not get involved in the fight against drug production and the drugs trade.

This was a task for the Afghans and the British, who are leading the battle to curb opium production, he said.

Struck refused to comment on the deployment of elite troops from Germany's crack KSK unit operating with the U.S.-led Operation Enduring Freedom against the Taleban and al-Qaeda in the south of Afghanistan.

The Bundestag, the lower house of the German parliament, is expected to approve the renewed mandate by a large majority when it meets in its pre-election form on September 28.

While the composition of Germany's new government remains uncertain, it is regarded as certain to continue current German policy in Afghanistan.

ISAF currently has around 12,000 troops operating mainly around Kabul, as well as in the relatively peaceful north and west.

The United States has some 18,000 troops in Afghanistan and has put pressure on ISAF to expand its operations, so that the U.S. forces can be partially withdrawn. I would love to see pics of the KSK in Afghanistan! They kick @$$! 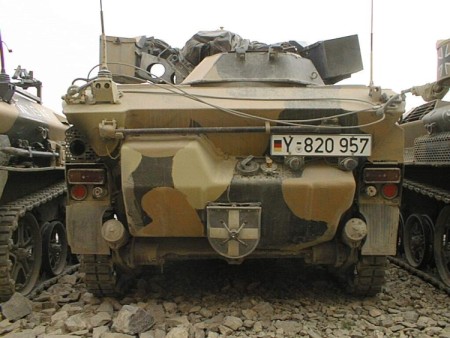