Registered Member
So a combination of S400 and Rafale is better than a combination of s400 and J20. Why do India think so lowly of China's J20, yet do highly of a western aircraft conceived couple of decades earlier? I guess it must be true then. Jai Hind.

"India's Rafale against China’s S-400 system is a much better bet than Beijing’s J-20 against New Delhi’s air defence systems,” the analyst said"

No dedicated long or intermediate range SAM systems yet until S-400 delivery completion vs China having HQ-9/A/B, HQ-22, S-400, S-300PMUx

Decent Spyder and antiquated low speed short to mid range Akash based on 1970s Soviet Kub missiles they just upgraded vs China having modernised Tor in HQ-17, and HQ-7A.

By the time India finishes developing MR-SAM, China would have introduced or about to put into service even better SAMs.

Anyone can make a claim like J-7 is better than F-22. Doesn't make it true. Only Indians seem to find appeal in engaging in those sorts of fantasies. A Rafale is barely a match for a J-10C + J-16 combo which is about the same price probably cheaper than what India buys from France.

Let's not forget China ALREADY has over a hundred J-10Cs and hundreds of J-16. China ALREADY has more J-20 than India plans to buy Rafale. Building J-20s at a rate three times faster than France delivers Rafales to India.

If a Rafale has no ability to handle the combined force of J-10C and J-16, a few J-20s could devastate an entire squadron of Rafales. If for some reason Rafale has supadupa Hindu and French magic no military giant has, China can send hundreds of missiles to Rafale bases, an ability India to this day still does not have. Brahmos doesn't have the range and the MKI hasn't got the penetration to attack any major Chinese bases. Even so, look at AD difference above.

China ALREADY has far superior status in every domain compared to India. India PLANS to work on achieving a military status of where China's currently already is. The gap is like the gap between 1990 China and 2020 USA. Beyond measurable. Stop those delusions. India is not even a regional military power and the fanboys love to claim everywhere on the english speaking internet that they are either 3rd or 4th "most powafool!". Some are deluded enough to claim they are no.2 whereas reality is they are only performing no.2s on their neighbour's front yard.
O

Registered Member
Let's not forget networked warfare where all modern Chinese platforms are well integrated. What EW planes has India got? What AWACS and AEWC planes? China has their own, leading electronics and military electronics industries vs whatever India manages to import from countries unwilling to sell their top notch. Then compare numbers. How many tankers has India got and hopes to have in the coming decades? China has more dedicated tankers already and H-6 tanks plus what Y-20 can eventually be developed into as dedicated tanker variant. Space based assets? India at a 0.1 if China is a 10. Domestic industry to produce and induct more? India at 0.01 if China at 10.

In fact it would be inappropriate to call this gap as wide as China 1990 vs USA 2020. China back in 1990 at least had semi decent industries that cover many bases and in some respects are deep. China already developed and built its first gen SSN by the 1990s and had it for nearly 20 years at that point. India compared to China now is like China in 1960 vs USA 2020 but just with more modern electronics and slightly better industry than China 1960s.

Not Indian. Its a South Korean K-9 crew.

Kaeshmiri said:
Not Indian. Its a South Korean K-9 crew.

I was wondering why they were so generous with the ammo usage. Thanks. 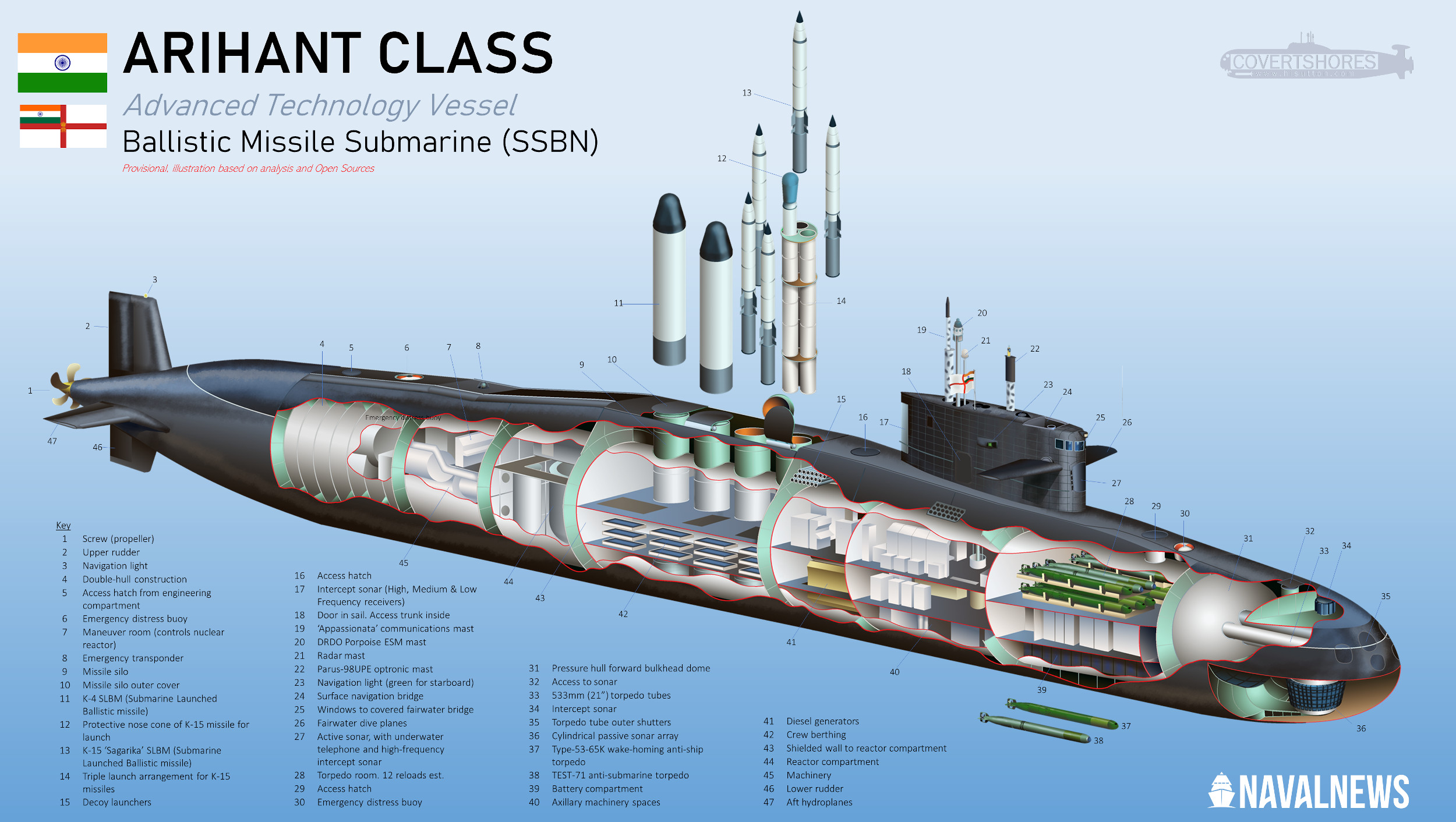 Traditionally excellent infographics by H I Sutton. This time - Arihant class.
Article itself:

Traditionally excellent infographics by H I Sutton. This time - Arihant class.
Article itself:

Do note that Indian Navy flag is a variation of Royal Navy flag. Would fit well considering the new alignment of the country.

Russian assistance was there, no one hides it.
But worth noting, that she is unlike any Russian nuclear submarine - and is far more reminiscent of Kilo-class, which Indians themselves had for many decades. So Russian assistance is by no means equal to Russian design.

Gloire_bb said:
Russian assistance was there, no one hides it.
But worth noting, that she is unlike any Russian nuclear submarine - and is far more reminiscent of Kilo-class, which Indians themselves had for many decades. So Russian assistance is by no means equal to Russian design.
Click to expand...

I consider it to be designed and assisted all the way by Russians. Even today, India doesn't have the technologies required to outfit a surface warship ( regarding Radars, powerplant, missiles, cannons etc) and it's only reasonable that India faces bigger hurdles for nuclear Submarines.
You must log in or register to reply here.