A Chinese state-owned aircraft maker has awarded Egypt's AOI Aircraft Factory a production certificate for the K-8E basic fighter jet trainer aircraft, the official Xinhua News Agency reports
AOI is producing 80 of the low-priced jets under a five-year-old contract with China National Aero-Technology Import and Export Corporation.
The deal underscores China's use of sales of inexpensive, low-technology military hardware to shore up ties with developing nations.
A prototype of the licensed aircraft was tested in 2001 and more than 40 have already been incorporated into the Egyptian Air Force's training brigade.
AOI was presented on Monday with a Certificate of Recognition for Phase II of K-8E production, Xinhua said, recognising the Egyptian company's production technology capability and management and quality control.
Chinese officials say the deal marked the first time China has transferred aircraft production technology abroad, although it has also worked with Pakistan in development of the K-8 and other aircraft.
Pakistan in April broke ground on a factory to produce the joint Pakistan-China developed JF-17 Thunder fighter jet.
China has scored some success with exports of trainer and basic attack planes such as the subsonic K-8, with Tanzania, Sri Lanka and Zambia also buying the plane.

Anyone know anything about this?
S

I am not amazed...it was about time..actualy Egypt had got Transfer of technology & facility for production early. What they wee not given was the certificate for production & China haulted the parts export to them. Egyptions were in talk with both Chinese & Pakistanis for a long time over K-8 tech transfer. Its realy good to see K-8 being ranked at top with big boys by many countries specialy in Middile East. Pakistan has selling K-8 to Saudis, UAE & 2 to Iran which may buy more.

I dont think it has been made public but Egypt is also interested in JF-17 project & may opt for technology transfer of it aswell. US is not providing them AIM-120 AMRAAM but JF-17 gives them chance to SD-10. It would be good if Egypt buys JF-17/FC-1 but its better not to give them tech transfer.

Unless Egypt is buying nearly 200, I don't think its even feasible for them to acquire the ability to mass produce the JF-17 at home, at most they'll be producing spare-parts (assuming China and Pak agree).

As for the K-8, it is very good news, especially for the Chinese military aviation industry, which worked the vast majority of the project.
S


CAIRO, August 29 -- An Egyptian aircraft manufacture company was awarded on Monday a production certificate by a Chinese company, the largest cooperation project between China and Egypt.


A K-8E training plane sits at an aircraft plant in Cairo, capital of Egypt, August 29, 2005. [21dnn.com]
The Certificate of Recognition for Phase II of the K-8E aircraft co-production prow was awarded by China National Aero-Technology Import and Export Corporation (CATIC) to Egypt's A.O.I Aircraft Factory in the latter's factory.

On the awarding ceremony, CATIC President Fu Shula said the Egyptian factory has possessed the overall capability of production technology, quality control and production management of the K-8E aircraft.

"It is definitely a remarkable achievement of Egypt's aviation industry, and it is also a significant success of joint efforts by both the countries," he said.

In 1999, CATIC, a major foreign trade company in China, signed a contract of 347.4 million US dollars with the Egyptian Defence Department to export 80 K-8E aircraft, a pilot training jet and its production line.

The K-8E aircraft is designed for training missions such as acrobatic, night and spin flights as well as for armament operation training.

1) after trainee program most of the time the pilots wish to change to the newest (chinese ...) planes
2) egybt don_t have to buy trainee jets, they could export them to other arabian-/african states
1) startet again .....

seems to be a win-win situation to all partizipants

Egypt should stick with F-16s.

this is a trainning aircraft!!!! you cant train wit f-16's

My bad, I thought Egypt was buying combat aircraft.

VIP Professional
Registered Member
well... the K-8 can be used for light-attack purpose if needed.... they should of got FTC-2000 instead, that way L-15 can actually stand a chance in the PLA market

VIP Professional
Registered Member
plaaf is getting 10 JL-9s next year, so I'm sure it's not forgotten.

tphuang said:
plaaf is getting 10 JL-9s next year, so I'm sure it's not forgotten.
Click to expand...

the JL-9 is the FTC-2000....
if you haven't heard the news from a while back PLAAF are going with the production of JL-9 instead of L-15, which i think is complete BS, due to teh fact the L-15 is a more advance design and not based on the Mig-21 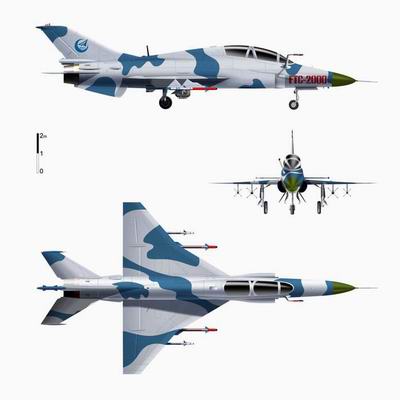