discspinner said:
The scary thing, while there are plenty of dumbasses in China, people like this actually become generals and strategists advising Indian leaders. Literally the blind leading the blind.
Click to expand...

Not unlike Trump become POTUS.

Bltizo said:
I might write an update of Chinese carrier progress for 2020 soon but I don't post much in that subreddit anymore unless I'm directly summoned.
I don't have it in me to write an entirely long spiel every time lol.
Click to expand...

How about r/warcollege? It seems to be pretty sane. r/warships get downvoted at first, but eventually evens out.

Another flyover update. The quality is rather poor. 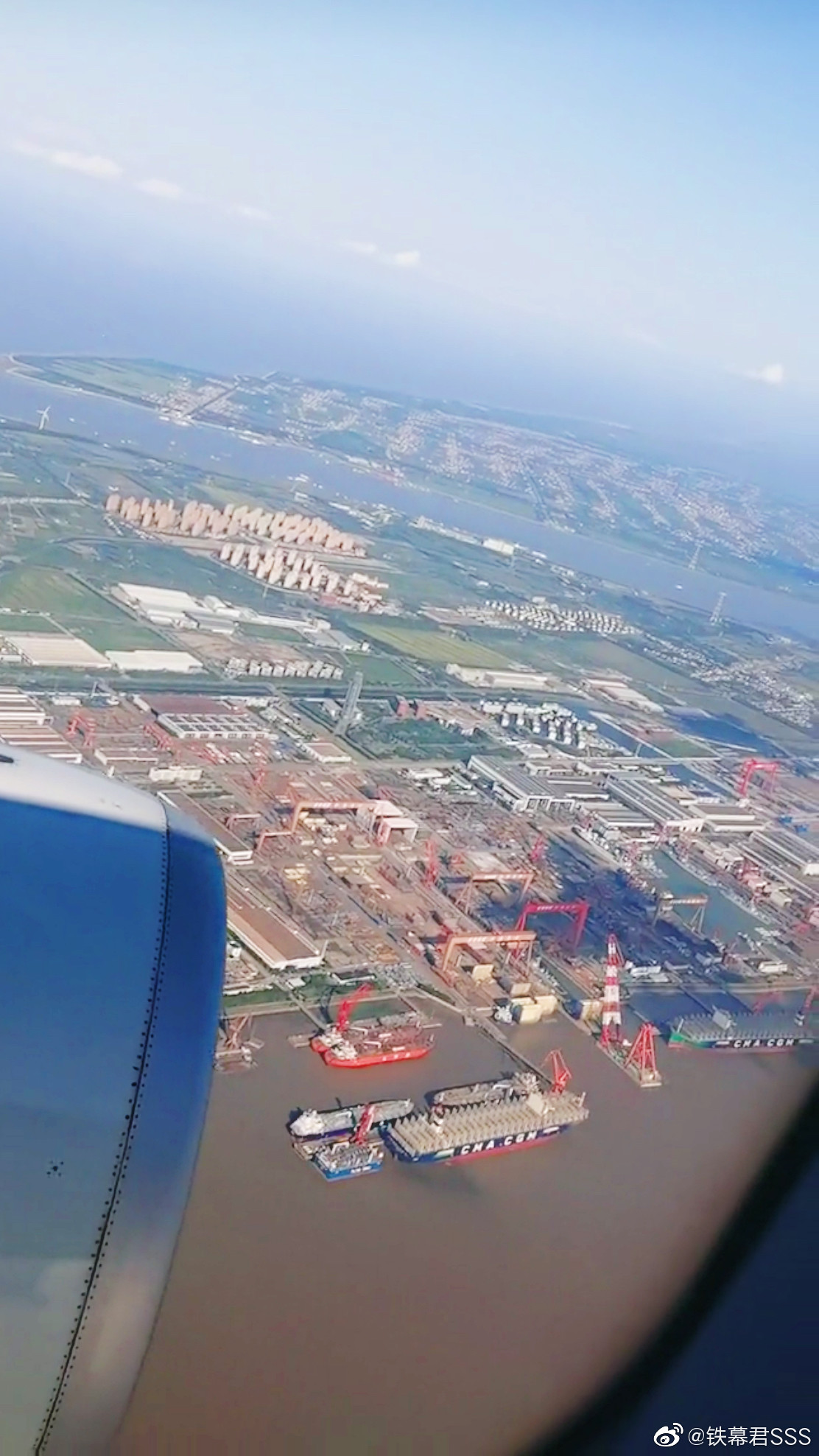 Registered Member
Is there a non-subscription place to read this?

silentlurker said:
Is there a non-subscription place to read this?
Click to expand...

003 and More: An Update on China’s Aircraft Carriers
Over the past year, disparate elements of the Chinese Navy’s carrier development program have continued to progress and come together.

As another year passes, additional developments in the Chinese People’s Liberation Army Navy (PLAN) carrier program continue to be sighted and confirmed, in spite of the effects of the COVID-19 pandemic. Meanwhile, geopolitical tensions between the United States and China show no sign of easing. Media interest in Chinese military and naval developments shows no sign of easing either, particularly with regard to speculation about the future path of Chinese carrier development.

This article will review some of the developments and rumors in the Chinese carrier sphere that have occurred since The Diplomat published a
Please, Log in or Register to view URLs content!
, as well as further clarifying some continuing confusions over the designations of PLAN carriers.

And Then There Were Two…

As expected, the PLAN commissioned its second aircraft carrier, CV-17 Shandong, on December 17, 2019. Shandong joins CV-16 Liaoning, its sister ship and the basis for CV-17’s overall design and configuration. Since entering service late last year, Shandong has embarked on multiple training cruises, with at least one instance where Shandong and Liaoning were both out at sea
Please, Log in or Register to view URLs content!
.

The entry into service of CV-17 marks the Chinese Navy’s entry into a rare group of nations with more than one aircraft carrier in commission, though of course it goes without saying in the year 2020 that significant workup and training will be required before the PLAN achieves more robust and mature carrier operations. Nevertheless, the domestic construction of a new carrier from keel to island and from launch to commissioning, and the relatively short elapsed time for this process (keel laid in early 2015, vessel commissioned in late 2019) will provide important experience and reassurance for the navy and shipbuilding industry in their ability to deliver carriers into the future, particularly for the shipyard involved in this case, Dalian.

The situation with the airwing of CV-16 and CV-17 is somewhat less clear. The PLAN’s current lone carrierborne fighter type is the J-15; as of late 2019 only 24 J-15 fighters have been confirmed to be in service with no indications of additional in-service airframes produced at that time. By early 2020, pictures and rumors emerged that another batch of improved J-15s were in production, said to include various improvements including more advanced radar, avionics and weapons. That said, the size of this batch is yet to be determined, and it is also unknown if these new production J-15s will only be compatible with the ski jump (STOBAR) carriers CV-16 and CV-17, or if they will have requisite modifications to also operate from the future catapult equipped (CATOBAR) carrier currently under construction, known as 003. It is also not known definitively if this new batch of J-15s will receive a new designation, though in some circles they have been dubbed “J-15B.”

One of the other significant developments in Chinese carrier progress is the pace of work on carrier 003 at Jiangnan shipyard in Shanghai. As now established, 003 will be the Chinese Navy’s first CATOBAR carrier, and while it will remain conventionally powered, it will likely be significantly larger than Liaoning and Shandong, with a full displacement commonly cited at some 85,000 tons.

Attempts have been made to estimate the length of the ship by measuring the individual hull super-blocks, and while the range of numbers produced are subject to error, it is widely accepted at this stage that even without the bow module visible, the total cumulative hull/waterline length is nearly 300 meters, already almost as long as the total 305-meter length (including flight deck) of the carriers Liaoning and Shandong. In fact, the sheer size of 003’s potential waterline length and beam (the latter being 40 meters at its widest point) has led some parts of the PLA-watching community to question if past rumors of 85,000 tons full displacement may have been an underestimate or perhaps reflective of an older configuration or design. It was known in earlier years that 003 was originally intended to field steam catapults rather than electromagnetic (EM) catapults, so it is plausible that changes in 003’s design and displacement may have occurred alongside the decision to equip it with EM catapults.

At this point in time, work will proceed for the super-blocks to be fully mated together including installation of the bow module, at which point additional modules forming the upper decks, hangar decks and flight deck will gradually be added, until the island is finally installed. Afterwards, the ship will be launched. Current projections set that for early to mid 2022 at the earliest. After launch, the ship will be fitted out with its relevant mission systems, including its much awaited EM catapults. Only then will it proceed to sea trials and enter service, under the expected pennant number CV-18.

The visible progress on carrier 003 and its impending launch leads observers naturally to wonder what will follow. For many years, it has been speculated that the Chinese Navy will seek to field at least six aircraft carriers, which has gained prominence in mainstream commentary thanks to some
Please, Log in or Register to view URLs content!
suggesting the PLAN will seek six carriers by 2035. It is also widely accepted in the PLA watching community that the final goal for PLAN carrier development is large, nuclear-powered supercarriers not dissimilar to US Nimitz- and Ford-class CVNs, but the timetable for their emergence is not known.

With two shipyards (Dalian and Jiangnan) proving they are capable of constructing carriers, the question now becomes when the next Chinese carrier will emerge after 003. It is expected that additional carriers adopting the 003 design will be built before the PLAN advances to a nuclear powered design, but it’s not known how many 003 pattern carriers may be built. It is also not known if further 003 pattern carriers will also be designated “003” or if the “00X” designation represents successive carrier hulls rather than carrier designs.

Interestingly, at least one Chinese-language PLA insider with an established long term track record has himself dismissed foreign media expectations of “six carriers by 2035,” remarking that the Chinese Navy’s plans spoke of 10 or more carriers; however, it is unclear when this would occur by, whether by 2035 or later. That remarked carrier count represents proper aircraft carriers, not including the previously discussed 076 assault carrier, which is spoken of as an amphibious assault ship instead. Nevertheless, such numbers for future Chinese carriers can rightly considered as fantastical and speculative at this stage. But with both Dalian and Jiangnan demonstrating their ability to produce carriers, the potential for dual shipyard carrier production now exists – and a decade ago in 2010 the idea of the PLAN fielding some 39 high end Aegis-type destroyers
Please, Log in or Register to view URLs content!
would have seemed fantastical as well, so only time will tell.

Nevertheless, fixed wing carrierborne AEW&C are a vital and essential part to any navy that seeks to field a robust and capable carrier airwing, and their ability to enhance a carrier group’s offensive and defensive capabilities and overall situational awareness and network-centric warfare is unmatched by any other platform type that will exist in the near future. KJ-600 will likely remain in testing for at least another two to three years, but given the Chinese aerospace industry’s extensive experience in developing, testing and building various AEW&C types over the years (KJ-2000, KJ-200, ZDK-03, and KJ-500), it is likely the structural and aerodynamic aspects of the aircraft will present more novelty than its radar or associated control and datalinking systems.

Otherwise, pictures of the FC-31 demonstrators (specifically airframe number 31003, also known as the flying “V2” demonstrator) being tested continue to leak out once every few months, which could correspond to work relevant to their carrierborne, PLA-funded variant. As always, it is part of dutiful responsibility to remind readers that the “J-31” designation doesn’t exist for any Chinese fighter, and that the “J-31” is actually the FC-31 export fighter proposal instead. Whether the proper, PLA-funded carrierborne FC-31 derivative will be called “J-31” or “J-35” or some other designation is not yet known.

What’s in a Name?

From mid-2019 to the second half of 2020, many disparate elements of the Chinese Navy’s carrier development have continued to progress and come together.

From the perspective of journalistic, academic and professional accuracy, it is somewhat jarring to see out-of-date and incorrect designations still in use. The names of these carriers might not be overtly consequential, but for the purposes of resolving confusion and creating consistency, it is likely desirable for various commentators and authors to acquaint themselves with the correct nomenclature.

by78 said:
Another flyover update. The quality is rather poor.
Click to expand...

It looks to me that they have connected the first front modules. The tarp that was covering the first front division also seems to have been moved towards the center of the hull. What do you think?


11226p said:
Another great article about 003 and chinese carriers in general by our beloved moderator Bltizo
Click to expand...

I didnt knew that bltizo was a writer for The Diplomat. The Diplomat is a geopolitical website that seems to me to have a tendency to criticize china.
C

11226p said:
Another great article about 003 and chinese carriers in general by our beloved moderator Bltizo

You should post this on r/geopolitics and get some discussion going on there! Or, if you're cool with it, I can post it. Up to you
H

You should post this on r/geopolitics and get some discussion going on there! Or, if you're cool with it, I can post it. Up to you
Click to expand...

r/geopolitics (reddit right now in general) is the last place you expect for constructive discussion. Full of anti-china bias
You must log in or register to reply here.