HENAN, CHINA - MAY 12: (CHINA OUT) Workers clean the quake destroyed gate of a hospital on May 12, 2008 in Henan, China. A major earthquake measuring 7.8 on the Richter scale jolted Wenchuan County of southwest China's Sichuan Province at 2:28 pm Monday. The current confirmed death toll stands at at least 8,500 people. Beichuan county is one of the worst-hit areas some 50km from the epicentre with 80 per cent of buildings reported destroyed. The death toll is expected to rise, as nine hours after the quake hit, rescue teams have yet to reach the epicentre in Wenchuan county, Xinhua news agency reported. (Photo by Luo Gensheng/ChinaFotoPress/Getty Images)
Click to expand...

Rescuers search the rubble of a collapsed building in Dujiangyan, in southwest China after an earthquake measuring 7.8 rocked Sichuan province. The foreign ministry estimates that 5,000 people have been killed.
Click to expand...

Rescuers try to get a boy (wearing a helmut for protection) out from the rubble of the collapsed Juyuan middle school where six children died in Dujiangyan, in southwest China after an earthquake measuring 7.8 rocked the area.
Click to expand...

Rescuers search for students at Juyuan Middle School in Juyuan Township of Dujiangyan City, about 100 kilometers from the epicenter of the earthquake.
Click to expand... Chinese women cries on a street after an earthquake strike in Chengdu of southwest China's Sichuan province
Click to expand... Family members gather at the remains of the collapsed Juyuan middle school.
Click to expand... A man walks down a staircase full of debris inside a hospital after an earthquake in Chengdu.
Click to expand... Medical staff and family members evacuate the patients from a hospital in Chongqing
Click to expand... A crack on an apartment building is seen following a massive earthquake in Lanzhou in northwest China's Gansu province
Click to expand... LANZHOU, CHINA - MAY 12: (CHINA OUT) Primary school students squat under the desks during an earthquake on May 12, 2008 in Lanzhou, north China's Gansu province. A major earthquake measuring 7.5 on the Richter scale jolted Wenchuan County of southwest China's Sichuan Province at 2:28 pm Monday, the State Seismological Bureau said. (Photo by Sun Jianrong/ChinaFotoPress/Getty Images)392763295
Click to expand... CHENGDU, CHINA - MAY 12: (CHINA OUT) A husband kisses his wife as she waits to give birth in the yard of a hospital after being evacuated, on May 12, 2008 in Chengdu, Sichuan province, northern China.
Click to expand... XI'AN, CHINA - MAY 12: (CHINA OUT) Medical wards are set up in tents on the lawn of a hospital after patients were evacuated from the hospital building on May 12, 2008 in Xi'an, Shaanxi province, northern China.
Click to expand... XI'AN, CHINA - MAY 12: (CHINA OUT) Patients lie on the lawn of a hospital after they were evacuated from the hospital building on May 12, 2008 in Xi'an, Shaanxi province, northern China.
Click to expand...

New report says it's actually a 7.9 magnitude earthquake. Many chemical plants containing deadly gases were seriously damaged as well, the Chinese seems to be very quick in its response and ordered troops to the region immediately. Unfortunately the deathtoll would likely to rise.

bd popeye said:
Photos of the tragic Earhtquake in China!
Click to expand...

God bless and peserve the injured...God rest the souls of the dead, and God comfort all of the friends, family, and all loved ones of those injured and killed.

I know my church will be sending aide, and I know our nation, the United States as a whole, as it always does, will prepare and render as much aide as we can or are allowed, to those afflicted by this massive natural disaster.

Irrespective of any differences, helping those in need is something that can cut always across all national boundaries and cultures.
Last edited: May 12, 2008

A family member of mine was actually on a business trip to Chengdu when the earthquake happened. Apparently, the earthquake so severe that he was not able to stand upright in his hotel room. Thank god that the building held (most buildings in the city apparently) and he was able to get out. Once he got out he tried to get to the airport to get back to Beijing, however, the traffic was pretty much in chaos and Taxis could nowhere be found. But luckily he had gotten a ride from some good hearted semaritan. When he got to the airport, he found that all flights were cancelled, so he decided to stay there until the next day and see whats going to happen. Yet, in another stroke of luck, sometime later on the same day he was able to get a free flight back to Beijing on one of the planes that carried the Party members who accompanied President Hu to the disaster site.

The government seems to be quite coordinated and fast-reacting in dealing with natural disasters like this, but we shall see.


As a side note, during all of this, the telecomunications were pretty much down due to overloading of the system, but strangly, the texting service still worked. (usfull to know shall you find yourself in a similar situation; although i hope you'll never)

Our deepest condolences to the relatives to the ones lost and the best of luck to the recovering.
S

So sad and heart breaking.

I have always wondered why they teach children to hide under the table when there is an earthquake whereas they should get out of the building as fast as possible. Maybe by crawling if it gets too shaky to walk or run.

VIP Professional
Registered Member
Due the sake of our younger/more sensible audience, all images of death bodies are removed. There is no reason to indul gorge with the tragedy, its horrible enough as it.

Gollevainen said:
Due the sake of our younger/more sensible audience, all images of death bodies are removed. There is no reason to indul gorge with the tragedy, its horrible enough as it.

I agree! Everyone please abide with gollys and my request in the first post! Rain followed the earthquake in Dujiangyan, adding even more hardship to a disaster.
Photo: Claro Cortes Iv/Reuters
Click to expand... A girl is pulled out from the rubble of a school in Juyuan.
Photo: Ng Han Guan/Associated Press
Click to expand... A student aiding a classmate still in the ruins of a high school in Beichuan County.
Photo: Chen Xie/Xinhua, via Associated Press
Click to expand... A boy being rescued in Dujiangyan
Click to expand... Destruction in Djuiangyan, the epicenter of the earthquake.
Photo: Claro Cortes Iv/Reuters
Click to expand... Chinese residents try to salvage their belongings from a collapsed building in Dujiangyan, in southwest China's Sichuan province.
Click to expand... A bulldozer prepares to tear down a damaged building in Dujiangyan, in southwest China's Sichuan province.
Click to expand... A Chinese boy waits to be rescued from the rubbles of a collapsed building in Beichuan, Sichuan province on May 13.
Click to expand...

Does any forum members have family or friends in the disaster region?
K

Some latest images from the epicenter: 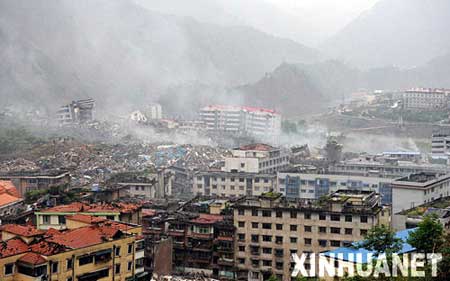 Downtown area of Beichuan county after the quake, one of the hardest hit regions, located some 80 miles away from the actual epicenter. According to the state media, the troops have just arrived in Beichuan country during the last few hours, the weather forecast over the region does not look good, and they are in need of food, water, shelter, and medical supplies.

Roads to towns near epicenter are heavily damages, further complicating the search and rescue effort.

And again, does any fellow forum members have friends or families in the affected region?