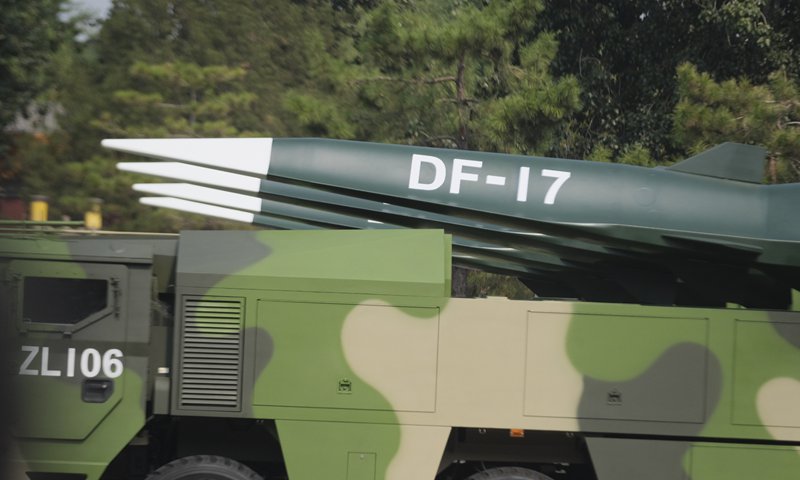 Registered Member
No doubt for DF-100 not the DF-17 boosted HGV. Probably a newer scramjet to allow for higher speeds and/or range for the previous DF-100/ Xing Kong hypersonic cruise missile.
L

That's interesting. Assuming an average velocity of mach 5 firing a SCRAMjet for 600 seconds would equate to over 600 miles of range. Assuming an average velocity of mach 7 you could get up to 900 miles of range. Of course, much depends on the actual thrust of the engine and whatever payload is strapped to it, so these are just ideal estimates, and it's unlikely they're anywhere close to turning a scramjet into a weapon, but if they can get even a fraction of that range and combine it with a first stage booster (which presumably would also accelerate this missile into a speed regime where the SCRAMjet could initiate burn), they might have quite a deadly missile on their hands.

Registered Member
Can anyone ID these missile? Where are they going?

Gatekeeper said:
Can anyone ID these missile? Where are they going?

HQ-16 SAMs no idea whether B or C version or older. Presumably going to Fujian for training exercises last week.

ougoah said:
HQ-16 SAMs no idea whether B or C version or older. Presumably going to Fujian for training exercises last week.
Click to expand...

If I'm not wrong YJ-18 should be the best one right? Since it can fit in 055 VLS and has highest range, supersonic sprint
O

If I'm not wrong YJ-18 should be the best one right? Since it can fit in 055 VLS and has highest range, supersonic sprint
Click to expand...

The YJ-18 is longer ranged than the YJ-12. About 100km more range. They are the main anti-surface missiles used by the PLAN now. The C803 AKA YJ-83 have long been replaced now onboard the more modern vessels. C-602 cruise missiles are still in service though. C-801 are also in service and these both come from similar era to the YJ-83. Unlike the YJ-83, these missiles are usually land or air launched.

YJ-12 is a staged, ramjet powered, rocket boosted missile. It has far superior cruise and terminal speeds than the YJ-18 which is a cruise missile until final sprint to target where the wing portion is discarded and a rocket booster takes over to achieve mach 2.5+ speeds. The YJ-12 can basically go mach 3-4 the whole 200km+ distance. They are used in conjunction with various ship borne cruise missiles like CJ-10 and DH-10 sub-variants. I'm not aware of modern PLAN ships carrying any other anti-surface missiles. The other missiles in service are either land based or air launched.

Russia uses the original YJ-18 (what the Chinese version is based on) 3M-54 Kalibr and the P-800 Oniks (which the Indian Brahmos is based on). It's not clear whether the P-800/Brahmos is inferior or superior to the YJ-12 but Russia has used the 3M-54 a lot more than they have the P-800. One could probably say they see more reliability and effectiveness in this cruise missile than the much hyped P-800/Brahmos. The YJ-12 flies low and does a lot of terminal maneuvers unlike the P-800/Brahmos and the YJ-12 also benefits from being a much more modern missile developed more than 10 years after the Oniks/Brahmos. BTW the Oniks was always offered for export and it is quite unlikely the Chinese didn't take a close consideration for purchasing it. After all, India uses it as their most capable anti-surface missile. However it is really a 90s design and has never been upgraded with a complete overhaul of modern electronics as far as I'm aware.

Western navies tend to prefer stealthier missiles which happen to be much slower but they have smarter flight and attack profiles. Electronically superior to Russian designs from the Soviet era of course which focused on speed and range and speed lol. Moskit, Kh-31 etc. The US prefers carrier fighters doing a lot more work and they benefit from having some of the best submarines and a lot of them. Russia and China occupy a more defensive posture and do rely quite a lot on these missiles effectively attacking and sinking unfriendly ships. It explains the proliferation of models and sub-variants while the US navy basically still just have short legged, subsonic Harpoon as the token anti-ship missile. They just have very different postures and doctrines and rely on other material for their purposes.
Last edited: Sep 6, 2020