Bltizo said:
These are the pictures from the CDF thread with the study screenshots that I'm talking about... note the third picture in particular... 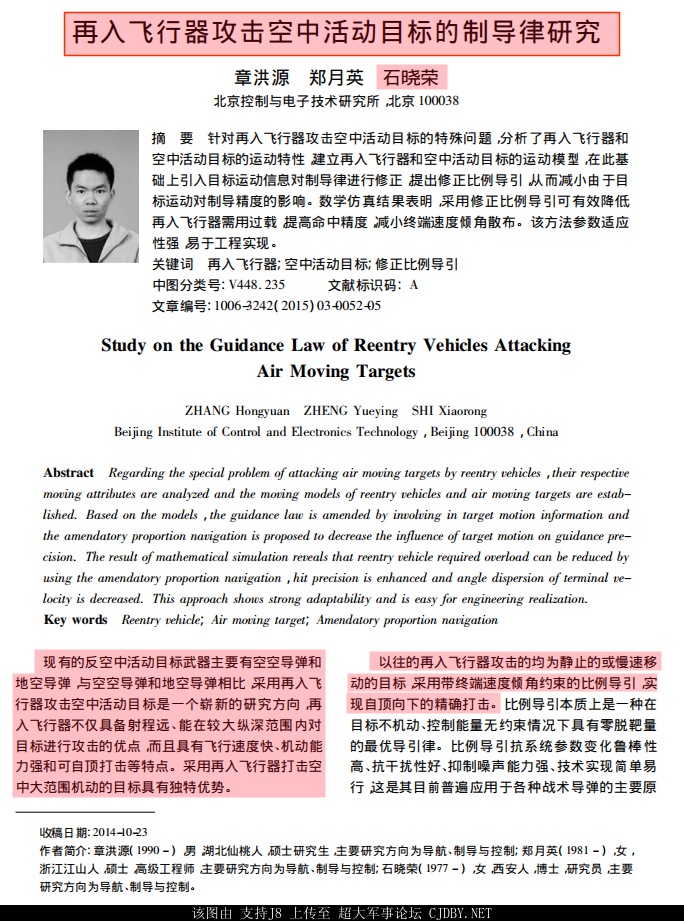 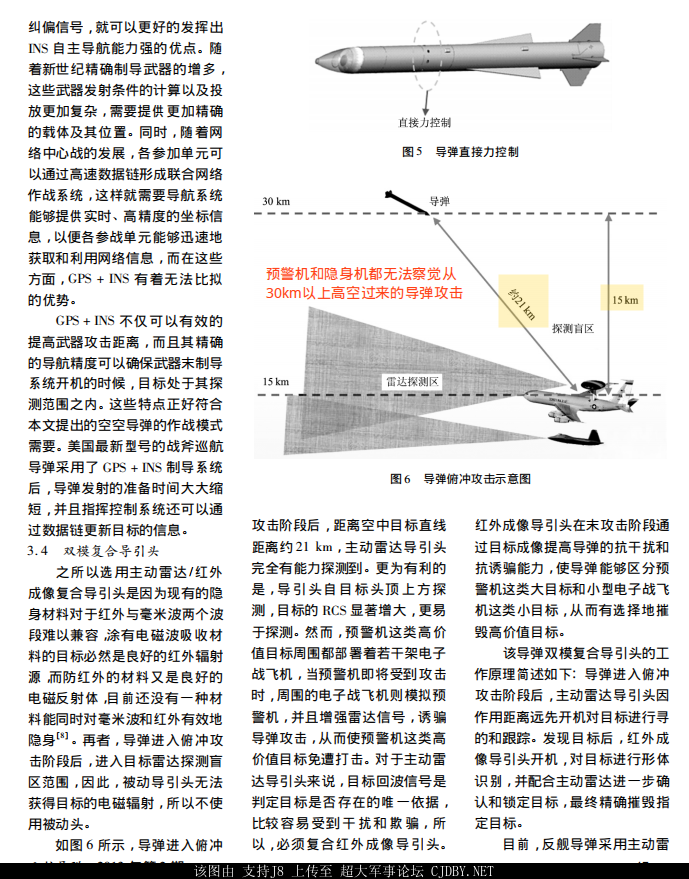 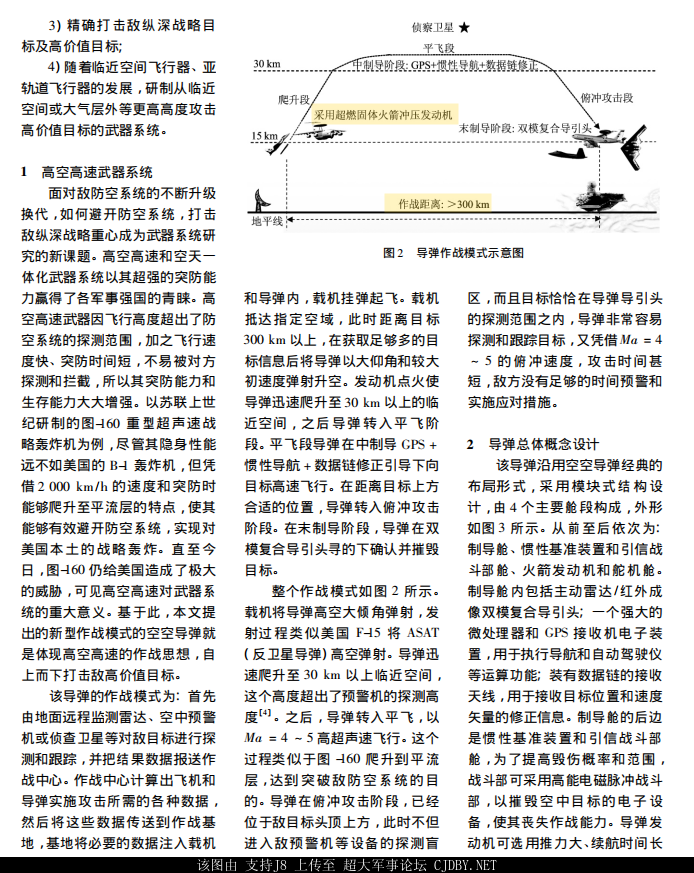 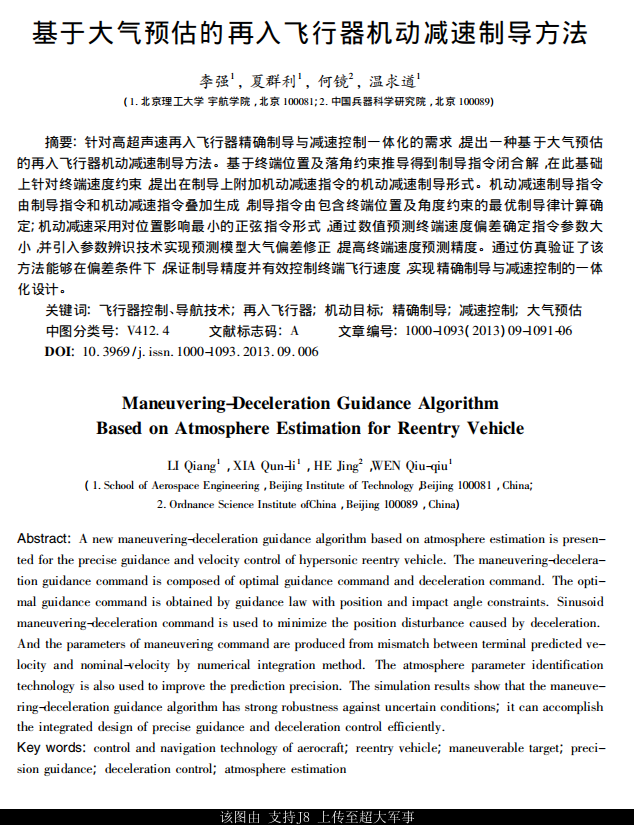 Looking at the drawing concerning the distance from missile and target with trajectory it seems it will not be impossible for the missile to re-acquire target without mid-way guidance.
GPS+INS alone will not provide real time positioning of moving targets especially a fixed wing jet planes.

SamuraiBlue said:
Looking at the drawing concerning the distance from missile and target with trajectory it seems it will not be impossible for the missile to re-acquire target without mid-way guidance.
GPS+INS alone will not provide real time positioning of moving targets especially a fixed wing jet planes.
Click to expand...

use some common sense, obviously this thing will have mid-course guidance otherwise its practicality is substantially diminished.

It says so as much in the article itself, where midcourse guidance is GPS+INS+datalink navigation, section 3.3 titled as: GPS + INS + 数据链修正导航系统

Obviously a GPS+INS only system wouldn't work for midcourse guidance... I'm not sure how you could think they would come up with something so incompetent.

Bltizo said:
use some common sense, obviously this thing will have mid-course guidance otherwise its practicality is substantially diminished.

It says so as much in the article itself, where midcourse guidance is GPS+INS+datalink navigation, section 3.3 titled as: GPS + INS + 数据链修正导航系统

Obviously a GPS+INS only system wouldn't work for midcourse guidance... I'm not sure how you could think they would come up with something so incompetent.
Click to expand...

Can't read simplified Hanji and as I posted looking at the drawing.

SamuraiBlue said:
Can't read simplified Hanji and as I posted looking at the drawing.
Click to expand...

Understandable, but you seemed awfully quick to assume that this system wouldn't have a midcourse datalink guidance capability, considering such a capability is necessary for virtually any MRAAM and would definitely be necessary for a weapon with such a long range such as this.

A more sensible response would have been to suspect it most likely did have such a function and to maybe ask if such a capability existed... but hey, maybe that's just me.

huitong said:
I will maintain the old PL-15 entry but call it PL-12G.
Click to expand...

at this point I think the old PL-15 entry should remain being called PL-15. Given all the advancements that the old PL-15 had over the original PL-12 (dual mode aesa, dual pulse rocket, 200km range, crop wing, tested aboard J-20, J-10B/C, J-16 etc) it would not be inconceivable for it to be given an entirely new designation.

the new missile I think should be called PL-XX, or VRLAAM for now, given how unique and unexpected it is (composite radar+imir guidance, semi-ballistic trajectory, >300km range, possible reaction jet maneuvring etc).

But that's just my own suggestion, when looking at the indicators.

Unless big shrimps have suggested that this new missile's real designation is actually PL-15... but if not, then I think it's safest to acknowledge we have no idea what this new thing should be called.

henri k also seems to believe the "old" PL-15/PL-12G is called PL-15 as well, and this new missile is still unknown designation

Yup here is the google translation a long one need to divide it in 3 parts. With 350+range this missile is a monster Henri K seem to believe this is AWAC killer missile

On November 20, 2016, a Chinese surfer published three photos on his Weibo account (~ Chinese Twitter), showing a Chinese J-16 bomber fighter taking off with two unusual missiles under his wings.
The photos, taken visibly outside the wall of Usine 112 in Shenyang where the J-16s were made, were removed a few hours later, and the surfer in question - known to the circle of amateurs of the Defense in China - also changed the name of his account for unknown reasons. But the three photos have already had time to cover half of the planet.
2016-11-22-la-chine-develops-one-missile-air-air-tres-longue-portee-01
2016-11-22-the-china-develops-a-missile-air-air-tres-longue-portee-02
A J-16 takes off with two new very long range Air-Air missiles (Source: 尾翼稳定性脱壳穿甲弹)
A J-16 takes off with two new very long range Air-Air missiles (Source: 尾翼稳定性脱壳穿甲弹)
What can we say at first about the shape of the missile? What types of targets address the missile? What could be his performance? This is what we will try to study in this file.
If the pylon used to carry the missile is the DF-4 model, which is also found on other Chinese fighter planes, then the size of the missile could be roughly deduced - its length should be around 5.8 meters and Has a homogeneous diameter of 300 mm, which is well above the 3.93 meters and 203 mm of the Chinese Air-Air missile PL-12, which has a range of more than 75 kilometers.
Its mass, if extrapolated from PL-12, could reach 667 kg, which is 3.3 times heavier than the PL-12 as well.
2016-11-22-la-chine-develops-a-missile-air-air-tres-longue-portee-05
The aerodynamic configuration of the missile is relatively "simple", we see only 4 small fins towards the nozzle on a conventional missile body. The presence of nearby rockets at forward radio frequencies suggests that it is an Air-Air missile, in which case its composition could be quite conventional as a result
① the rocket engine with solid propellant
② the payload, estimated at about 40 kg
③ the compartment of the control and guidance system
④ the researcher's head
So why an aerodynamic configuration so "simple"?
It is known that the central ailerons as seen on the American Air-AIM-120 missiles or French MICA are the main sources of lift. However, the studies show that as the speed increases, the drag generated by them increases, and the more the cell itself contributes to the lift of the missile.
And if we want a missile, Air-Air or not, to go far, we are obliged to increase its speed. In other words, the longer a missile wants to go fast, the less it should have fins. It is also for this reason that most long-range anti-aircraft missiles do not have many aerodynamic control surfaces.
Long-range Air-Air missiles such as the Joint Dual Role Air Dominance Missile (JDRADM), the Meteor or the KS-172 have all opted for this configuration.

(cont3)
In the case of AWACS, and depending on the platform-launcher SER, this distance can be up to 320 kilometers for a platform like the J-16. It is also necessary that the missile can adopt a flight profile which reduces the reaction time of its target and thus increase the chance of reaching it.
For this, reading numerous research papers published between 2010 and 2014 indicates that the Chinese - notably the CASIC and AVIC groups, as well as the NUDT Military University - were very interested in the parabolic trajectory for Air-Air missiles " Long and very long range with mixed guidance ".
A parabolic trajectory means that the missile, once launched, gains immediately and quickly in speed and especially in altitude, between 25 and 30 kilometers. At the apogee of this first trajectory phase, the engine, or the first segment of the engine, goes out and the missile passes in planed flight. On approaching its target, which should be at a lower altitude, the second phase of propulsion is triggered and the missile pursues the target with its own detection means - active / passive radar - see the guidance by infrared imagery.
Parabolic trajectory
Parabolic trajectory (Source: 空空导弹高抛弹道复合制导律研究)
Knowing that the vision of a main radar of AWACS is often limited in elevation, between 15 and 30 ° approximately, the AWACS will have much less time to react against a missile that "falls" from the top. A parabolic trajectory offers in addition to other advantages - the missile which gains rapidly in altitude during its first propelled phase loses less its "initial" speed, and the gliding flight at high altitude also allows to better preserve this one and the energy (Potential and kinetic) of the missile. In the final phase, the missile being above its target will also acquire more easily its target.

One of the simulations carried out in the document cited in the image above shows that for a flying target at 300 m / s at 10 km altitude and 150 km from the launch platform, which flies at 500 m / s and At 8 km altitude, the missile will touch its target with a Mach 2 speed and an angle of incidence of -20 °, after a flight that will have lasted 129 seconds, ie a little more than 2 minutes.

Other simulations were made taking into account the avoidance maneuver of the target but the final results do not change fundamentally.

And the presence of what it might be a conforming window for the IR imager, which lies just above the head of the missile on the J-16, seems to confirm that this missile follows a parabolic trajectory. The fact that it is oriented first upwards avoids its overheating by the flow of incoming air when the missile rapidly reaches altitude, with a high load factor of up to 45 g (the bottom "Of the missile will heat up more quickly when the missile is at a high AoA).
So here we have a whole new type of Chinese Air-Air missile, which should have a range of over 320 kilometers and which would target airplanes of large size and very high value. With a military load estimated at 40 kg, an explosion near an aircraft the size of a Boeing 767 or a B-2 makes it possible to damage it, or to eliminate it effectively.
It could, in some cases, also be used against low observability combat aircraft, but this does not appear to be its priority.
Finally, it should be noted that with a length of more than 5 meters, this new Chinese missile of very long range could not be carried by the J-20 fighter jet, at least not in its hold.
This shows first that the analysis that the J-20 can only be used as a "Fire & Run" interceptor, against slow and poorly maneuverable targets like the AWACS, is still not supported by the facts, and This mostly reflects on another even more important issue that is - How will the Chinese Air Force combine its different vectors in a future conflict?
The case to follow.
Henri K.
Annex: Note that there is also the trajectory known as "double parabolic", it is used for example by the missile 40N6 of the Russian S400 system to reach a range of 400 km with a relatively small size.
The Chinese group CASIC also plans to use this type of trajectory in its project of "SABM" - Surface Air Ballistic Missile ...
Trajectory "Double parabolic"
Double Parabolic Trajectory
R

Registered Member
If this was meant to an extreme range, fire and forget, air to air missile intended to attack large non-maneuverable targets like AWACS, Would one not expect it would have some aerodynamic lifting surfaces to help extend its range?
T

VIP Professional
Nope, just the opposite. Extreme range is best achieved with parabolic trajectory. The missile goes high up where air is thin and wings are meaningless. Previous long range missiles had to use fairly flat trajectories due to limits of guidance tech. Then came better tech and now a smal amraam approaches aim54 in range, due to using parabolic trajectory. amraam does have wings because its also a medium range missile against fighters. but when making a dedicated long range missile with modern guidance, best design is a ballisic missile without wings achieving its range through ballistic trajectory.
You must log in or register to reply here.