Registered Member
The key is that the US Iran conflict is being fought in Iraq whose govt allows Iranian military operations against the US but disapproves of US operations and wants the US troops to leave. There is no legal or logistical basis for the US to continue to occupy bases in Iraq, with Iran ready to fire missiles against stationary bases and the local govt wanting the US to leave.

Out of iraq, US military will be pressed to maintain its occupation of Syria's oil fields and will have to concede broader Iran and Russian and Chinese influence in the Middle East.

Registered Member
Breaking news on CNN. News from the white house is that they believed the Iranians INTENTIONAL missed!

Make of this what you will.

In other news unrelated a Ukrainian airline 737-800 Crashed just 10 miles from the Airport in Iran it was taking off from.

It was an emotional rollercoaster watching that speech live. When Trump came out with Iran will never be allowed a nuclear weapon, and then went on to say that the American people should be grateful, I was seriously worried that he just pushed the big red button and ordered strikes on all Iranian nuclear facilities; and that the long delay on the start of the speech was him waiting for the missions to conclude before speaking.

Looks like Trump bottled it and has opted for more sanctions instead of further military action, for which we should all be thankful for.
O

Registered Member
Trump is probably the most peaceful president since Carter, heh. He just talks big but always backs down, and even wanted to pull out troops from Syria before the military and career spooks intervened with their hysterical protests.

occupatio said:
Trump is probably the most peaceful president since Carter, heh. He just talks big but always backs down, and even wanted to pull out troops from Syria before the military and career spooks intervened with their hysterical protests.
Click to expand...

He has no other way. The possibility of DPRK smuggling ICBM and nuclear arms tech to Iran -being them long time friends- , is a thing to consider for those "goddam jihadists". LoL
At the moment in Suria he has to cope with sultan erdogan and hustle as much oil is possible... BTW, What about Syrians, Iraqi's, Palestinians and Yemeni's ?

The main reason of destabilisation of ME is US presence if every form. POTUS need to be more peaceful than ever
H

Registered Member
IMHO, keep your eye on that red flag. If it is taken down then de-escalation and back to the usual business. I don't think Iran will stop there. The mood in the region isn't favorable for Washington.

The aftermath of the Iranian missile strike
Please, Log in or Register to view URLs content!
. Lots of conflicting reports on casualties; some articles mentioned them but then was scrubbed from their website. Time will tell.
J

Jura said:
according to Glob. Times
Iranian embassy to China trending on Chinese social media after rockets hit US bases
so follow the link 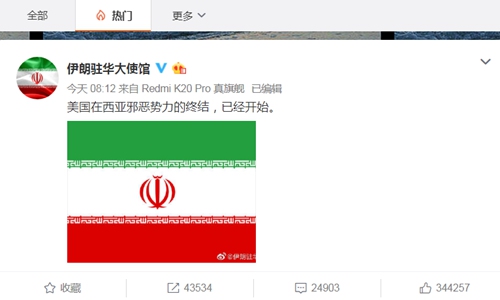 I truly believe the US has already been trapped into the war swamp of Vietnam war 2.0 in the ME. The red flag of revenge raised on the top of an Iranian Shia mosque conveys more significant messages. This call for revenge is based on religion, not politics, thus can mobilize most of the people who practice that faith. And this call is time-lasting.

The US killed Saddam Hussein of Iraq, which already made Americans the number one enemy of Sunni Muslims. Now, it assassinated Qasem Soleimani of Iran, which made Americans the number one enemy of Shia Muslims. The adage of "enemy's enemy is friend" is common in most human societies. The two groups of Muslims may set their religious differences aside temporarily to work together to attack Americans. Everything is possible now, but there is no way-out for the US. . 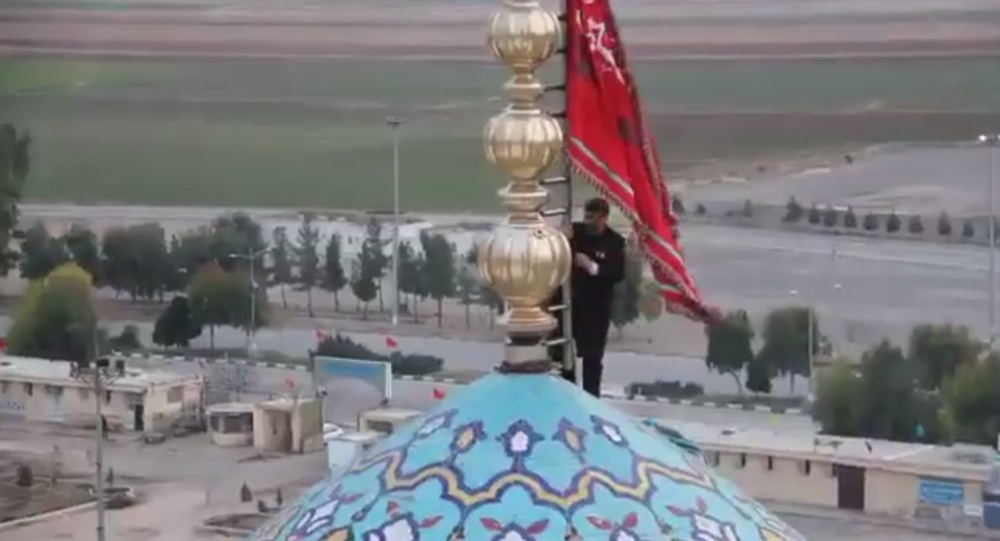 I believe the government of Iran doesn't really have the gut to revenge the US. Missile strike symbolic. but the religious fighters will use their holy-fighter tactics (or you can call terrorist tactics) to revenge on the US. This will never end!
You must log in or register to reply here.