Registered Member
We are just a month away from the military parade, and I would like a place to gather the rumors and discussions dedicated to this years military parade.

The rumors I have so far on new military equipment that will be shown are the new "strategic rifle", new 370MM (?) rocket artillery, Z-20, and new "intermediate range weapon" (Cruise missile or hypersonic?). All the above rumors come from Yankeesama.

combined with the news
Please, Log in or Register to view URLs content!
seem to suggest DF-41 will be present as well.

These are the rumors I got so far, if anyone has more please share.
S

Registered Member
it's very interesting but in my opinion off topic in this sub forum, part of the problem i told at the moderators. It's not your fault but this part need to be reorganized
W

Registered Member
Apparently the "new intermediate range weapon" will be YJ/DF-XXX or YJ/DF-100. It is said to be in the following photo 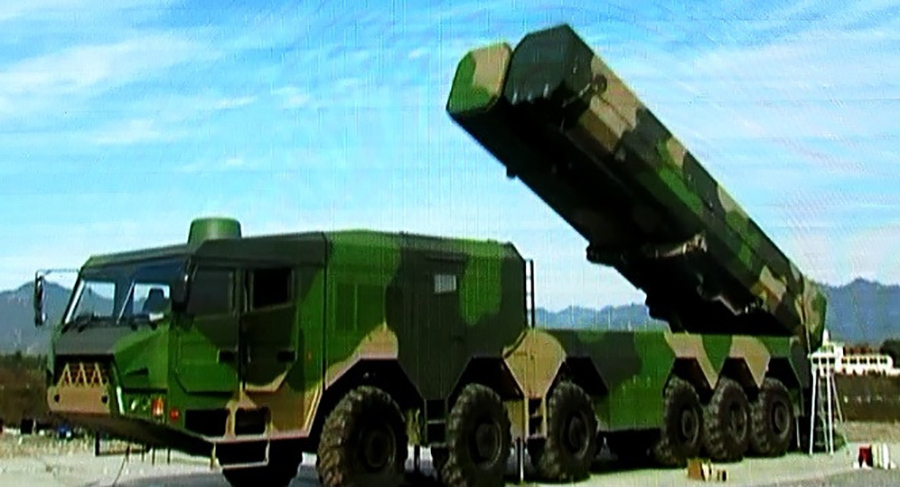 If this is off topic for this sub forum, can Mods move this thread elsewhere? IDK what would be a more proper sub forum for this.

The parade, to be held Oct. 1 in the capital Beijing, will commemorate the 70th anniversary of the founding of the People’s Republic of China following the communist victory of nationalist forces in 1949.

Gen. Cai Zhijun, a member of the Chinese Army General Staff, said at a news conference in Beijing on Thursday that China’s People’s Liberation Army “will show some advanced weapons for the first time.”

He did not go into specifics, but Hong Kong’s South China Morning Post reported that the weapon systems that will make their debut include the DF-41 road-mobile intercontinental ballistic missile and the JL-2 submarine-launched ballistic missile.

Both missiles are typically fitted with nuclear warheads. The DF-41 is a multiple independently targetable reentry vehicle. It’s able to carry 10-12 nuclear warheads, each of which can be directed to a different target.

Photographs of flypast rehearsals for the parade suggest a new version of the Xi’an H-6K bomber and cruise missile carrier will also make an appearance. This variant, reportedly designated the H-6N, is equipped with an in-flight refueling probe to extend its range.

The Chengdu J-20 stealth fighter jet, which entered operational service with the People’s Liberation Army Air Force this year following operational test and evaluation, will also take part in the parade flypast, although this will not be its first appearance at such events.

Cai took pains to note that the size of the military parade was not a sign of aggression and that the People’s Liberation Army was “committed to safeguarding world peace and regional stability.”

“This military parade won’t be targeted at any countries or districts and any specific incidents,” he said.
Click to expand...

China officially announced on Thursday that it will hold a grand military parade on October 1 to celebrate the 70th anniversary of the founding of the People's Republic of China. Some foreign media have highlighted the size of the parade and speculated on the advanced weapons that may be unveiled.

The Dongfeng-41 intercontinental ballistic missile has attracted much attention. Lianhe Zaobao, Singapore's largest Chinese-language newspaper, even called it a "big killer," while more foreign media have been speculating about the Dongfeng-41's possible targets based on its range.

Constant talks about Dongfeng-41 have appeared on the internet in recent years. According to foreign media reports, it has an operational range of about 14, 000 kilometers and can carry about 10 independently targetable nuclear warheads, capable of hitting anywhere on Earth. Analysts also believe that as the longest-range missile in the history of the People's Liberation Army Rocket Force, Dongfeng-41 also has the first-class accuracy and maneuverability, which is a revolutionary leap forward in China's military technology.

Speculation by some Western experts over Dongfeng-41's possible targets based on its range reveal certain forces' hostility toward China. China pursues a national defense policy that is defensive in nature. It will not change its policy just because it now has Dongfeng-41.

Dongfeng-41 is a strategic deterrent weapon. The possibility of putting it into real practice is low. But the creation of the weapon shows China's firm will and national strength.

In the face of global turbulence and the frequent emergencies of troublemakers both in the region around China and across the world, China's capability of strategic deterrence is of great importance to itself and to the security of the whole region.

China had displayed new military equipment to reveal the country's national strength in every previous military parade. This year's military parade on National Day will be a concentrated display of China's great achievements of national defense and army building over the past 70 years. These accomplishments have been made based on China's comprehensive national strength, and will certainly be enhanced with the future improvement of the country's national power.

China's military already possesses world-class equipment such as the Dongfeng-41, and thus has stronger ability to protect the country's sovereign security and territorial integrity.

Against such a background, the Chinese people can live and work in peace and realize their personal and family goals. For those troublemakers who attempt to provoke China and threaten China's territorial sovereignty and those powers which try to stir up troubles in the peripheries of China, Dongfeng-41 will make them think twice.

China's strong military strength is a visible fact in accordance with the country's industrial and technological development. The world will gradually recognize and adapt to the development of China's military power. It will be less sensitive to China's future new weapons and more respectful of China's national strength.

China has no intention to engage in an arms race with any country. Honestly, the development of China's new weapons still lags behind the country's international status, challenges and the responsibilities of the Chinese army. Its strategic deterrence is in particularly need to be promoted.

The world's interest in the Dongfeng-41 indicates that the high-quality evolution of China's military power will greatly help the country gasp more strategic initiatives.
Click to expand...

Registered Member
its very relevant that the df-41 will be the heaviest icbm ever deployed on wheeled TELs. A significant technology milestone never achieved by urss and especially the US: someone remembers the ridicolous saga of the MX basing concepts ( from tundra hovercrafts to mammoth land vehicles to midget submarines in the great lakes, to mammoth fortified complex under a mountain) ?
W

In every parade since 2009 someone have said SLBMs will show up, but they never did. I doubt JL2 will make a showing at all. I don't like SCMP as a source either.
W

styx said:
its very relevant that the df-41 will be the heaviest icbm ever deployed on wheeled TELs. A significant technology milestone never achieved by urss and especially the US: someone remembers the ridicolous saga of the MX basing concepts ( from tundra hovercrafts to mammoth land vehicles to midget submarines in the great lakes, to mammoth fortified complex under a mountain) ?
Click to expand...

41 may indeed be the heaviest, but the russians mastered TEL ICBMs since the 1980s with the RS-12. Keep in mind that Russia does not need the range of DF-41 to cover the entirety of its adversaries, and therefore does not need to make a heavier missile. US uses SLBMs, and have no need for TEL based ICBMs.
Last edited: Aug 29, 2019

watdahek said:
In every parade since 2009 someone have said SLBMs will show up, but they never did. I doubt JL2 will make a showing at all. I don't like SCMP as a source either.
Click to expand...

The last time an SLBM was shown was in 1999 -
Please, Log in or Register to view URLs content!
.
A

wowww, so much China has advanced in just 20 years
You must log in or register to reply here.